Sometimes I think I have the most photographed dog in Bristol.  He loves to come SUPing with us and as we paddle down Bristol’s floating harbour everyone on the banks is interested in a dog on a paddleboard – a lot of people get their cameras out.

I’ve seen a number of posts to SUPing groups from people who are wondering about taking their dog paddling with them.  It is definitely something which can be done (there are even videos of dogs surfing – Big wave Bono for an extreme example!) and just needs a little patience and encouragement.  I would recommend getting a doggy lifejacket as it not only ensures they float but also provides a very useful handle for lifting them back out of the water if they happen to fall/jump in.

Barney has been scared of the water since we encouraged him a little too far into the waves when he was young.  Getting him onto the board was a slow process but he would be very miffed if we went without him now.  The first step was getting him to stand on a board on land.  We never forced him on, but encouraged him with treats to step onto it on his own.  We made it a good place for him (mostly through food treats).  Once he was happy jumping on in the dry, we tried with the board in water that was shallow enough to still be beached and repeated the same process.  Next was in deep water secured to the side, then a very short paddle on my knees, finally progressing to longer and longer paddles.

Barney is still scared of the water and won’t go in which means he never tries to jump off the board but he loves being on the water with us.  If you happen to be in Bristol and see us on the water, we will be using the hashtag #barneysups on instagram and facebook for any photos… 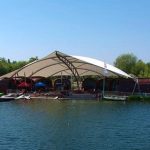 **UPDATE: Unfortunately due to baby Rock having still not made an appearance, RockSUPs will no longer be able to make it to the demo weekend. JP-Australia and Fanatic will still… 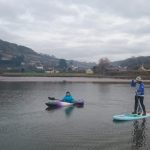 I've been a windsurfer for over 25 years but it is only recently that I have learned about cold water shock.  It is possibly less of an issue windsurfing (and… 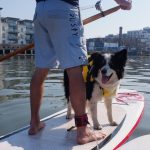 Sometimes I think I have the most photographed dog in Bristol.  He loves to come SUPing with us and as we paddle down Bristol's floating harbour everyone on the banks…